Capacity calculations by queuing (also known as analytic approach) are applied to perform long- to mid-term evaluations of infrastructure variants or timetable concepts. The usage of aggregated train types instead of an exactly given timetable allows a very quick setup, since there’s no need to compile the entire timetable for each infrastructure variant. Futhermore it permits the modelling of yet uncertain constraints (e.g. knowledge on the number of trains).

Simulation is applied to perform mid-term to short-term evaluations with comprehensive consideration of constraints. LUKS supports two modes of simulation:

Interfaces simplify both the import and export

To ensure an efficient integration into the workflow, LUKS offers various interfaces to read and write different formats of infrastructure and timetables.

It is usually the case that investigations of railway operations reveal a need to alter imported infrastructure data speedily and straightforwardly. But it must also be possible to completely recapture infrastructure without unreasonable effort.

Great value was attached when developing the user interface to simplifying standard work steps and providing access to them within a low number of necessary actions. The various editors are accordingly configured in context-related fashion; prototyping of new infrastructure is supported by station templates. 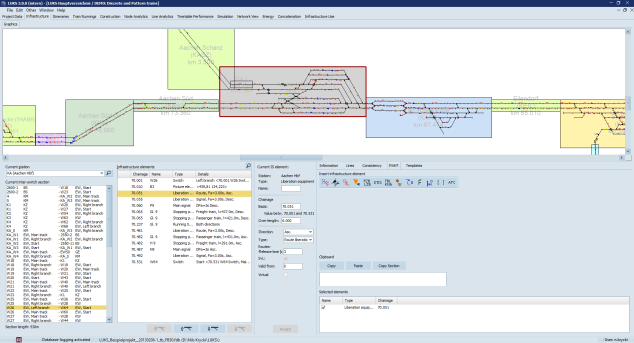 Building on a given infrastructure, “control post routes” are used to map all running options admitted by the signalling system. A route of this kind defines the course of a train’s movement through a control post, described as a series of decisions taken at all S&C systems to be negotiated.

Platform tracks are likewise based on the infrastructure initially captured and are required for the track-occupation diagram, as a means of demarcating “track groups” in analytical studies or, in simulation exercises, of establishing spatial limits for various types of interconnection between train movements. 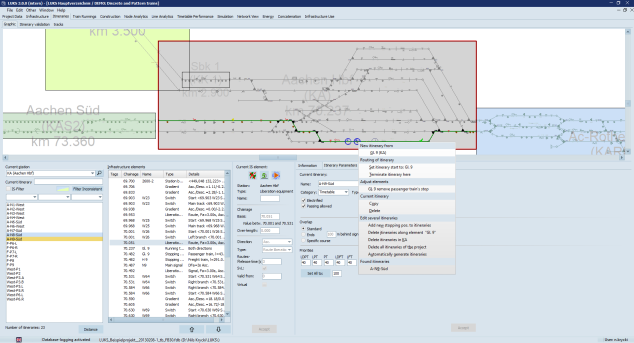 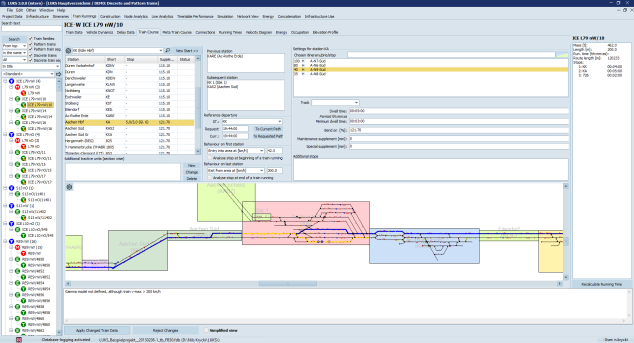 Track-occupation is computed on the basis of the running time calculated. This involves forming blocking times along the line negotiated using distance/time curves. Blocking time is taken to mean the time during which a block section between two block signals is occupied by a train, inclusive of various prior and subsequent running times. 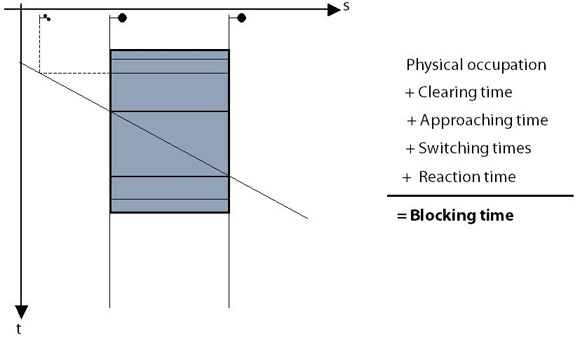 As with the running time calculation, the blocking time units calculated by LUKS and RuT-K were found to be identical. A blocking-time series is the sum of all blocking-time units along the line negotiated. Further details are to be found in [3].

The distance/time curves and blocking-time series for all trains computed are represented in a track-occupation graph that also points up any conflicting moves. Such conflicts always arise when several train movements wish to use the same infrastructure simultaneously. They can be remedied either directly in the running-path definition, in the course of further processing, or when the timetable is fine-tuned.

Modelling of ETCS according to EEIG-97E881 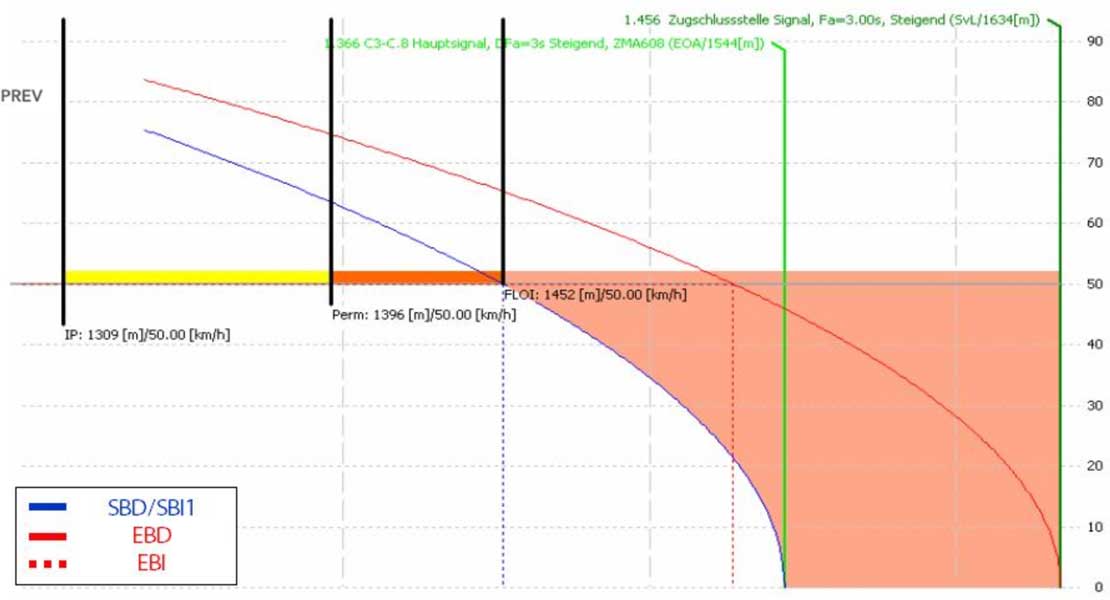 Based on the train movement information given in the train editor, the LUKS-K module facilitates the interactive fine-tuning of schedules and thus provides a convenient way of visualising and processing train movements, especially using the integrated conflict detection.

Using the common layout of all former editors (e.g. infrastructure or train editor), the time-distance diagram view provides the visualisation of the time-space trajectories of train paths combined with the associated blocking-time sequences and buffer times. Of course, several detail information can be displayed for any blocking. 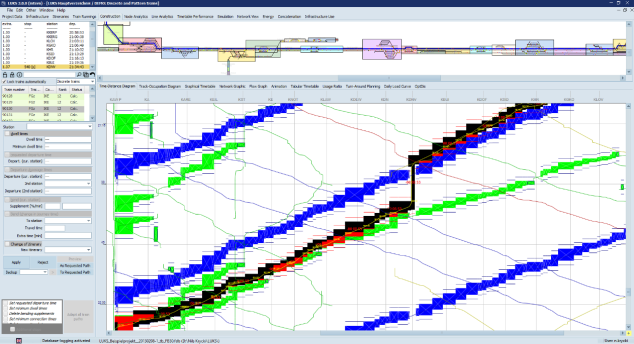 Given the tracks defined in the appropriate editor, LUKS-K can also compile a view for station tracks, which provides a sophisticated way of timetable respectively train data editing while focusing on a single station.

Again, several (interactive) tasks like changing the arrival and/or departure time or the used track are supported, while the running and blocking time calculation foresees potentional conflicts even beyond the considered station. 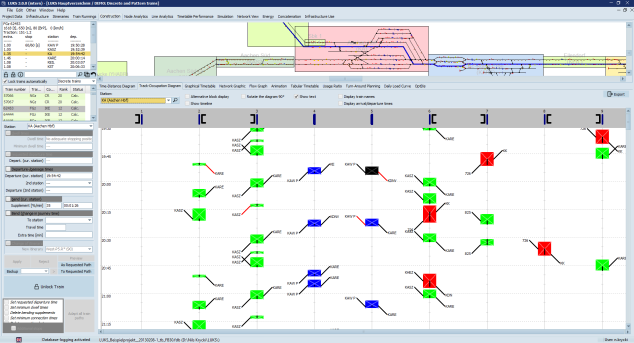 LUKS-A implements queueing based methods to get general statements about the utilization of infrastructure sectors or about their behavior at an increased utilization of individual relations. The queueing model has the advantage of identifying infrastructure bottlenecks or highly polluted areas or track groups rather quickly and on a more abstract level. The uncertainties of future developments and operating programs are represented by long-term-approaches like daily load curve, operation programs, queuing theory application and random variables.

In general, the exact timetable which has to be faced by the infrastructure is not yet known in this situation. Instead, by means of queueing theory the operating programme is understood as “customers” wanting to be “served” by the infrastructure. This way, the capacity assessment is directly linked to the operation’s quality expressed in terms of scheduled and unscheduled waiting times. These performance indicators can be calculated for different parts of the infrastructure, which is decomposed into “servers”. 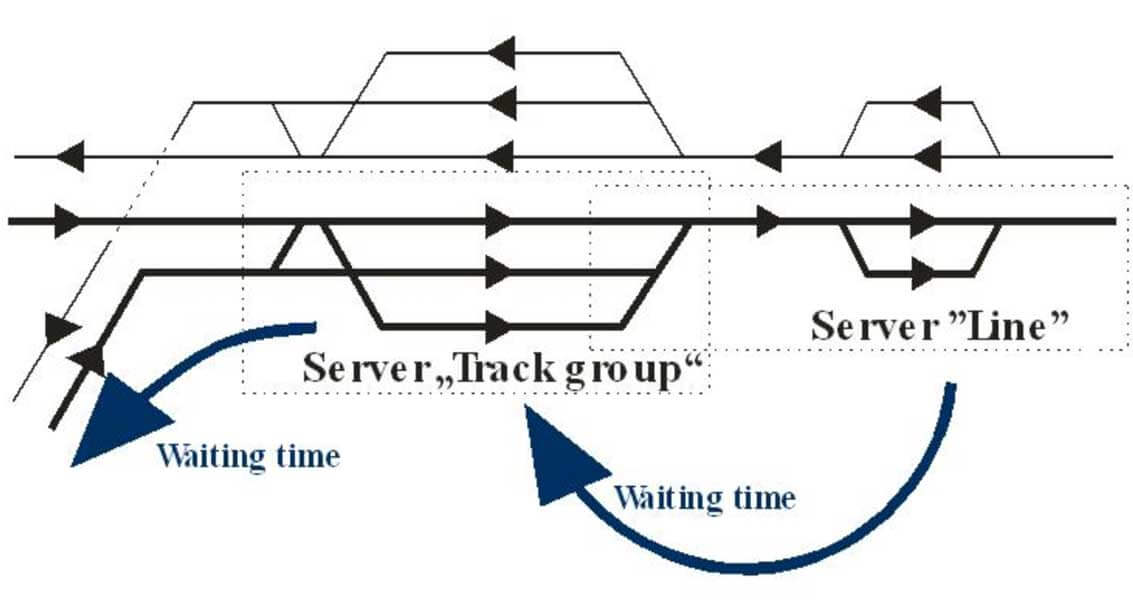 Analytic approach is based on queueing theory

Differentiation between theoretical and practical capacity 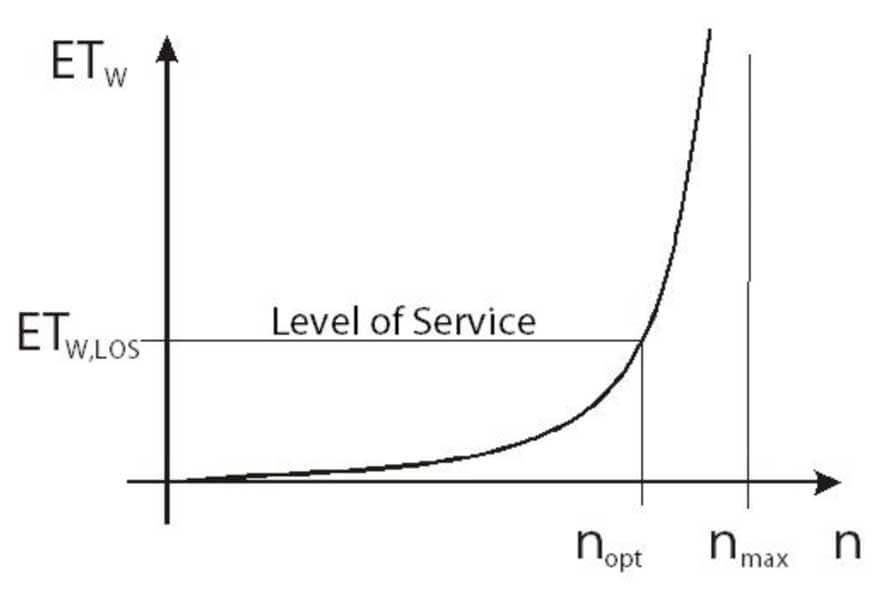 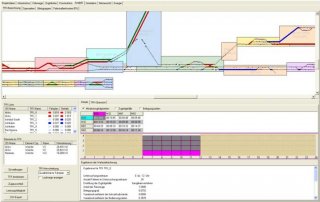 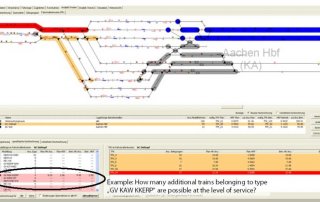 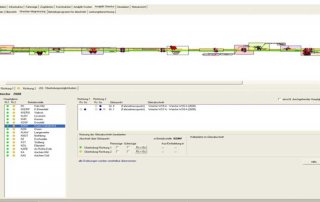 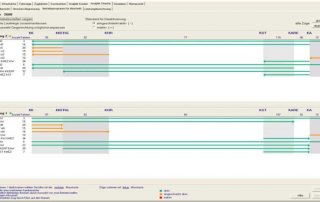 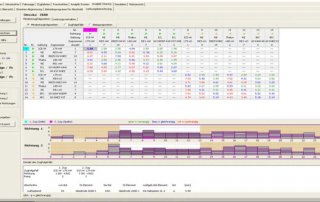 LUKS-S – Simulation of timetabling and operation

The simulation in LUKS does not require the user to detect or solve conflicts manually in any way. It automatically detects any overlapping of two blocking-times and solve them with a number of possible conflict resolution options. The available solution approaches mimic the behaviour of a dispatcher, who might e.g. alter the route within one or more stations or might insert passing and crossing stops or recommends trimming.

All potential conflicts resolutions are tested and evaluated with the microscopic data model. This allows a very realistic evaluation of the effects. The used objective function is highly configurable to model different conflict resolution strategies and goals.

LUKS-S offers simulation of timetabling and railway operation. Both simulation modes operate on the microscopic infrastructure and train data.

The simulation of timetabling provides information on whether a given operating schedule is viable, i.e. whether it is possible to construct a conflict-free timetable that contains the envisaged train movements.

Therefore, it turns a conflicted operating schedule into a conflict-free timetable using the automatic conflict detection and resolution. If the infrastructure does not have the capacity to handle all desired train trains, the simulation rejects some of them.

The simulation of operations scrutinizes the ability of an existing timetable to deal with unforeseen disruptions and works on two levels to properly model railway operations.

On the field level, it synchronously simulates the work of the train driver and the interlocking system. It monitors the speed of train movements and memorizes their current location and status. It additionally simulates the setting of routes and signals and incorporates disturbances into the proceedings at random. There is no complex resolution of conflicts at this level; track-occupation conflicts are resolved by the simulated traffic protection system, i.e. by means of trimming.

On the traffic control level, the current status of all trains and the microscopic running time calculation are used to create a forecast of the future situation. Any conflicts arising in the forecast are handled by the automatic conflict detection and resolution. The anticipatory approach reduces the risk of deadlocks. This level regularly creates rescheduled timetable and forwards them to the field level.

This simulation mode also offers a batch mode. The batch mode allows the automatic simulation and evaluation of a large number of runs, each one with different random disturbances.

The simulation results can be evaluated inside and outside of LUKS. The build-in evaluations include:

The results can also be exported to CSV (Excel/Access), OTT and railML-TT. This allows additional evaluation of the results outside of LUKS.